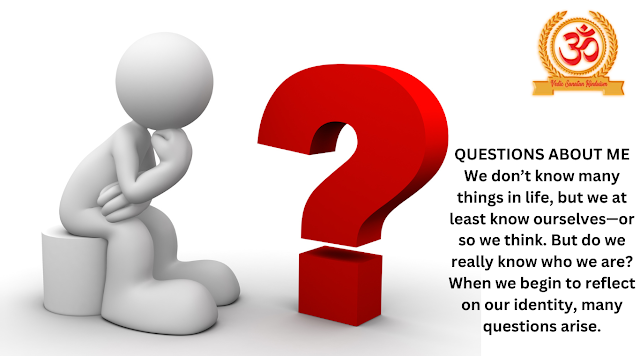 As we saw in the former post, we can not say anything definitively about the world Is it real? Is it fantastic ? Does it live when I ’m not apprehensive of it? There are no clear answers to these questions. The nebulosity makes the world neither helpful nor intriguing. OK, let me put it this way the world is intriguing in numerous superficial ways but not intriguing in the least if all anyone wants is to know the verity as it is.

What's intriguing and clearly more helpful is to pay careful attention to one who's passing the world — and that’s the “ me ” in every one of us! After all, it’s me who certifies that the world exists, so it makes sense to check out the credentials of the certifying authority.

My present “ me ” is a combination of the visible( the body), the unnoticeable( mind, intellect, pride), and the spiritual( the Ātman) the first two are material and the third is insubstantial. How the material and the insubstantial combine into a flawless total would have been a riddle, except that they do n’t. Their combination is analogous to the “ combination ” of the rope with the( inaptly perceived) snake in asemi-lit room.

Which of the two me’s — material and spiritual is the real me?

Still, it must be eternal, If a thing is real. Temporary or time- bound reality is a circumlocution for a dream or a daydream — in other words, a misperception. A simple test to find the real me is to check whether it everdisappears.However, it’s not me, If it does. The real me if it's really real — should be always present, no matter what, since real = eternal. This isn't true of the body it disappears when I fall asleep. I'm no longer conscious of my resting body. I may run and dance in my dreams, but the body that does it isn't the same as the one sleeping in my bed.

we typically treat as real. But the mind also disappears in deep sleep, when dreams cease. I'm conscious of neither the body nor the mind in deep sleep. The exposure of both body and mind may be temporary, but that disqualifies them from being considered “ real. ” They aren't real and they aren't me.

What noway disappears but remains constant is the knowledge of waking, dream and deepsleep.However, I would n’t indeed witness them, If I were n’t conscious of these countries. I'm conscious when I'm awake( at this very moment, as I write this, for case); I'm conscious when I'm featuring( I could n’t see the dream unless I were conscious of it, could I?); I'm conscious when I'm in deep sleep( which is how I flash back the following morning my experience of it “ I had a joyful sleep. I was n’t apprehensive of anything differently! ”). The Ātman is the knowledge which unifies the experience of all the three countries. It's the Ātman which is the real me. Or, to put it simply, bluntly, and directly I'm the Ātman.

The answer is yeah to both thequestions.However, it's because the tone is being confused with the sense of “ I ”, If that sounds antithetical. It's through perceptiveness that I realize that I'm not the “I. ” How am I different from my “ I ”?

The “ I ”, or pride, provides me with an “ I ” sense. It separates me from whatever it determines is “ not me ” — and this “ not me ” becomes my “ world. ” The “ not me ” — or “ the other ” — makes connections possible. “ The other ” may be a person, a place, an object, and idea, or whatever. Some of these I may want to either retain or run down from. Once a want is created, the desire to fulfill it arises, and it forces me to do commodity about it. Which is how the pride makes me suppose of myself as a doer I do air. It also makes me suppose of myself as the experiencer I witness the results of air. When my desire is fulfilled I feel happy; when it's not, I feel miserable. In this way the pride keeps me tied to the air chain.

The Ātman could n’t be more different from the pride. The Ātman is neither the doer nor the experiencer. Air has no sway over the Ātman. also, the Ātman shatters the walls that separate me from others, living and nonliving. The idea of “ I and mine ” is absent in the Ātman. It’s the material me that's separate from the material world my body, my mind, my ideas, my expedients all of these can be distinguished from those of others.

But the insubstantial me, or the Ātman, has no boundaries. My Ātman isn't different from your Ātman. You and I feel to be different, it's true, but that's because we're linked with “ I ”- s attached to different bodies and minds. Once the “ I ” is out of the way, there's no way to distinguish one Ātman from another. It’s like two swells once they subside, there's no way to distinguish one from the other.

The surge identity is temporary. When a surge subsides, it’s not dead and gone. What's a surge other than some water of the ocean shaped into a specific form and moving in a specific way? As a surge, it has a distinct identity. Once its surge identity ends, it does n’t stop being. It simply goes back to being one with the ocean. As a mortal being, I'm a surge. As the Ātman I'm the ocean. The Ātman unifies everything into an concentrated total. The Ātman is all that there is.

When all material vestiges are exfoliate, I stand alone and horizonless. There's no sense of “ I ” there, first, because there's no there there and, second, because there's no “ world ” from which I need to distinguish myself. When everyone and everything is me, and there's neither you nor this nor that anywhere anytime, indeed the idea of “ me ” becomes pointless. When māyā is declawed, the pride disappears and, along with it, my identity as a finite, mortal critter. I come horizonless and immortal, filled with joy, perfection and freedom.

That experience seems far out at present, because the Ātman is in the clutches of māyā and is “ covered ” with material layers which endow it with an “ I ” attached to a body and mind which come “ me. ” Of course, the Ātman is only deluded into allowing that it's under māyā’s control. The Ātman’s thrall isn't real. The “ snake ” in thesemi-lit room wasn't real moreover, but that did n’t stop me from being scarified. similar is māyā’s mesmerizing magic that the Ātman’s ingrain freedom and joy do n’t stop it from passing thrall and suffering.